1. Role of syringolin A in the interaction of Pseudomonas syringae pv. syringae with plants 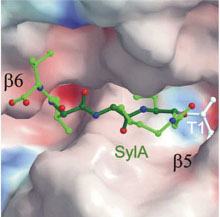 Syringolin A is a small peptide derivative that is secreted by the plant pathogenic bacterium Pseudomonas syringae pv. syringae in planta. We became interested in this compound because it induced programmed cell death of cells colonized by the powdery mildew fungal pathogen in wheat and Arabidopsis (1). The results of transcript profiling experiments in Arabidopsis and similar experiments in wheat (2) led to the hypothesis that the host proteasome might be the target. Testing this hypothesis revealed that syringolin A irreversibly inhibits all three catalytic activieties of the eukaryotic proteasome by a novel mechanism (3). By producing syringolin-negative muitants we also showed that that syringolin A acts a virulence factor in the interaction of the bacterium with its host plant Phaseolus vulgaris (bean). As the proteasome is central in many regulatory processes, including ones that are mediated by hormones such as auxin and jasmonic acid, it is not trivial to elucidate how proteasome inhibition increases virulence. As P. syringae pv. syringae does not proliferate on Arabidopsis thaliana, Nicotiana benthamiana is used as a model host plant. In this system we try to elucidate how proteasome inhibition leads to increased virulence.

2. Function and occurrence of syrbactins 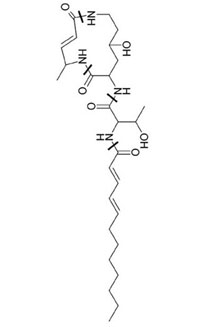 Syringolin A is a virulence factor secreted by the plant pathogen Pseudomonas syringae pv. syringae that irreversibly inhibits the eukaryotic proteasome by novel mechanism. Syringolin A is covalently attached to the active-site threonine of all three catalytic beta-subunits of the proteasome via opening of a double bond contained in the twelve-membered ring structure of syringolin A (1). We recently showed that glidobactin A, the only known molecule with a similar structure, is also an irreversible proteasome inhibitor that acts by the same mechanism (1). Thus, these two compounds constitute a novel family of proteasome inhibitors we dubbed syrbactins. Proteasome inhibitors are a new class of anti-cancer agents and have great medical potential. Indeed, glidobactin A was reported in the literature to have anti-tumor activity in a mouse model (Oka et al., J. Antibiot. 41, 1338-1350 (1988)), and we recently showed that syringolin A induces apoptosis and inhibits cell proliferation in human neuroblastoma and ovarian cancer cells (2). The sequence and architecture of the syringolin A synthetase genes we cloned earlier allowed the formulation of a syringolin A biosynthesis model (3) that in turn led to the successful cloning of the glidobactin A biosynthesis genes from a novel species belonging to the Burkholderiales that have a homologous structure and architeture (4). Searching through the more that 900 completely sequenced bacterial genomes identified a small but intriguing group of bacteria that share similar gene clusters: Burkholderia pseudomallei (a dangerous human pathogen and causal agent of melioidosis), Burkholderia oklahomensis (a human pathogen), Photorhabdus luminescens (an insect pathogen) and Photorhabdus asymbiotica (a human pathogen). Thus, it is hypothesized that these organisms are able to synthesize syrbactins. We are currently trying to isolate such a syrbactin from P. luminescens and explore its biochemical and biological function.

(4) Schellenberg, B., Bigler, L., and Dudler R. (2007). Identification of genes involved in the biosynthesis of the cytotoxic compound glidobactin from a soil bacterium. Environ. Microbiol. 9, 1640-1650. 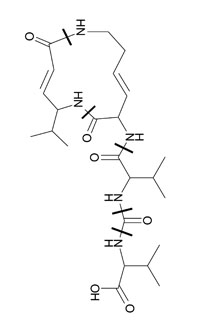 Syringolins constitute a family of peptide derivatives (syringolin A to syringolin F) secreted by the plant pathogen Pseudomonas syringae pv. syringae in planta (1,2). Recently, we identified syringolin A, the major variant of the family, to be a virulence factor that inhibits the eukaryotic proteasome by a novel mechanism (3). Syringolin A consists of a tripeptide, whereby two non-proteinogenic amino acids form a 12-membered ring structure. The tripeptide is N-terminally linked to the amino group of a fourth amino acid by a very unusual ureido group (1). We successfully cloned the genes encoding the syringolin synthetase, a mixed non-ribosomal peptide synthetse/polyketide synthetase. This allowed the formulation of a biosynthesis model that explains al molecular features of syringolin A with the exception of the ureido group (4). Currently we are completing experiments aiming at the elucidation of the regulation of the syringolin A biosynthesis gene cluster.