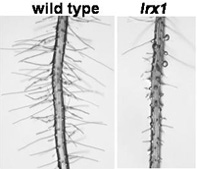 LRX1 is important for root hair formation. Root hairs are misshaped in lrx1 mutants compared to the wild type.

The plant cell wall is a complex supramolecular structure formed by polysaccharides and proteins. The aim of our work is to characterize genes / proteins that are involved in cell wall formation. LRX proteins have a regulatory function during this process. These extracellular proteins consist of a Leucine-Rich-Repeat (LRR) and an extensin domain (1). LRR-domains are frequently found in proteins with signaling or regulatory functions. The extensin domain is a structural cell-wall protein domain, presumably important for anchoring of the protein in the cell wall matrix. LRX1 and LRX2 of Arabidopsis thaliana are expressed in root hairs and mutations in the genes lead to aberrant cell wall formation and hence deformed root hair structures (2,3).

The aim of this project is the functional analysis of LRX1. In one approach, we attempt to identify the interaction partner of LRX1. In a second approach, we are characterizing the extensin domain of LRX1. This highly repetitive domain is crucial for LRX1 function and leads to insolubilization of the protein in the cell wall, most likely via oxidative cross-linking of tyrosine residues. The aim is to identify the domain(s) and eventually individual amino acid residue(s) in the extensin moiety that are crucial for the proper function of LRX1. 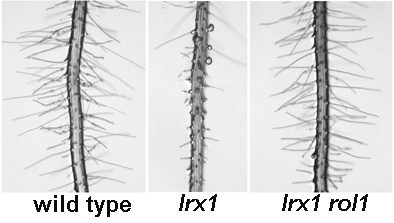 The defect in root hair formation in lrx1 can be suppressed by a mutation in second locus such as rol1. Suppressor mutations can reveal a functional relationship between two genetic loci.

We have performed an enhancer/suppressor screen on the lrx1 mutant and have identified a number rol (repressor of lrx1) mutants that suppress the lrx1 phenotype. Since the lrx1 mutant is affected in cell wall development, we expect this approach to result in the identification of genetic loci that are involved in cell wall formation in root hairs, but potentially also in other tissues. rol1-1 and rol1-2 are allelic mutations that both clearly suppress the lrx1 root hair phenotype. The ROL1 locus encodes RHM1, one of three rhamnose synthases encoded in the Arabidopsis genome. Rhamnose is an important component of pectin and we have shown that the pectin matrix in rol1 mutant plants is modified (1). These findings suggest that the change in the pectin matrix lead to suppression of the lrx1 phenotype.
We are currently characterizing a new rol locus. The mutation in the rol5 gene also changes the pectin structure, as determined by immunolocalisation with monoclonal antibodies targeted against cell wall epitopes. ROL5 appears to be involved in a process that is entirely different from ROL1. Yet, the change in the cell wall seems similar for both mutants. This further substantiates the hypothesis that suppression of lrx1 is caused by changes in the pectin matrix.

3. The role of flavonols in Arabidopsis development

The rol1 mutants are affected in rhamnose biosynthesis and develop different mutant root and shoot phenotypes. Rhamnose is a central component of pectin and rol1 mutants are affected in the pectin structure (1).
In addition, the rhamnosylation of flavonols is affected in rol1 mutants. To identify the effect of the change in the flavonol glycosylation profile on plant development, rol1 tt4 double mutants were established in which flavonol biosynthesis is blocked due to the tt4 mutation. Introduction of the tt4 mutation resulted in a complete suppression of the rol1 shoot phenotypes.
Hence, the changes in the flavonol glycosylation profile of rol1 mutants trigger developmental defects (2).

We are currently focussing on two points:

The mechanical properties of the cell wall regulates the growth rate and the final shape of an individual cell. Even though the composition of different cell walls is quite well understood, there is limited information available concerning the contribution of the different polysaccharidic and proteinaceous components of the wall to its properties. In this project, we are aiming at modifying the composition of cell walls and quantify the effects of these changes on the physical and growth properties of the cell.