In the past years, overusing, non-adapted usage and run-off of antibiotics in the environment led to multi-drug resistant bacteria development, which became a major problem in the entire world. The Infectious Disease Society of USA categorised the Gram-negative bacilli as the most important and dangerous microbes due to their ability to spread and their multi-drug resistance. These microorganisms are often found in hospital and are a major cause of nosocomial infections. It is a big challenge but crucial to find new compounds to fight the increasing number of resistant bacteria.

A new family of peptide antibiotics (so called peptidomimetic antibiotics) was designed in the chemistry group of Prof. Dr. John Robinson (UZH). These peptidomimetic antibiotics have shown to be highly active against many Gram-negative bacteria. In this project, we are investigating the mode of action (MoA) of these cyclic peptide antibiotics joining chemistry and biology knowledges. Next-sequencing platform combined with phenotypical and molecular methods are currently used to elucidate the MoA of these antimicrobial compounds in the opportunistic pathogenic bacterium Pseudomonas aeruginosa.

Affair of Burkholderia with metals

Most metals are important micronutrients for bacteria. Metal limitation inhibits bacterial growth while high metal concentration is toxic for cells. Hence a delicate balance has to be maintained by bacterial cells to ensure that they get sufficient levels of metals. We focus on the metal homeostasis mechanisms of Burkholderia, in particular, to iron and copper. Iron transport in Burkholderia has been well studied by several researchers and our group in the past and we identified a novel iron transport mechanism in bacteria. Although some studies have revealed copper resistance mechanisms in bacteria, less is known about the means by which bacteria import copper.

Previous work in the lab led to the identification of a secondary metabolite and a structurally similar signal molecule which regulates several genes involved in copper homeostasis. We currently investigate the role of this metabolite/signal molecule in copper transport/homeostasis/efflux using several molecular as well as biochemical assays. In addition, genes differentially expressed under different copper concentrations which are potentially involved in copper transport/homeostasis will be identified by RNA sequencing and further validated by qPCR as well as mutant construction. These experiments will help us to uncover the whole machinery of copper import/export in Burkholderia. 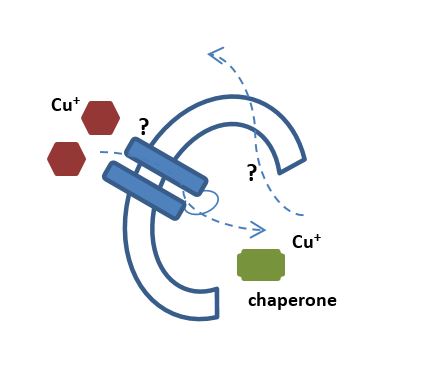 Illustration of copper-transport in Burkholderia.

In nature, a biofilm consists of multiple species of bacteria living in a complex environment. Competition for resources and space within a biofilm has triggered the evolution of various interaction strategies amongst biofilm community members. We seek to understand contact-dependent interactions between bacteria that most likely determine how the bacterial community is structured.  To achieve this we are evaluating the competition ability of the plant-promoting bacterium Pseudomonas putida. By co-inoculating two fluorescent tagged strains we show how P. putida is able to outcompete, in a contact-dependent manner, various soil and plant associated Pseudomonas spp. (See Figure). Using visualization tools such as the Confocal Light Scanning Microscope we aim to observe P. putida antagonism not only at a single cell level, but also at a community level by means of a flow cell chamber where a multispecies biofilm can be grown. To determine the mechanism responsible for this contact-dependent competition, we screened a transposon (mini-Tn5) mutant library, which delivered mutant strains that are not able to outcompete other bacteria, in contrast to the wild-type strain. Bioinformatic analysis of the mutant strains confirmed that the mechanism involved is a putative secretion system. Secretion systems are dependent on effector proteins that impair the growth of the targeted cell, however the molecular mechanism of this particular system and the type of effector proteins are delivered by our P. putida remains unknown.

We aim to extend the understanding of bacterial interactions in multispecies biofilms and provide evidence of the involvement of a secretion system in biofilm defense and invasion. We have recently sequenced the genome of our P. putida isolate to determine the genetic components of the secretion system putative cluster and to identify possible effector proteins.

Figure B. Colony of a mixed culture competition of P. putida tagged with Gfp against an untagged Pseudomonas sp.

The Burkholderia cepacia complex (Bcc) is a group of closely related species of the genus Burkholderia.  The complex is of both medical and biotechnological importance; medical because of the strains’ ability to cause infections of cystic fibrosis and immunocompromised patients, and biotechnological due to their plant growth promoting and biocontrol capabilities 1. The Bcc genome is large (nearly 8 Mb for B. cenocepacia H111) and consists of at least three replicons.  These are chromosomes 1 and 2 and the megaplasmid pC3. The large Bcc genome size and multireplicon structure enable Bcc strains to thrive in a range of different niches, agricultural and medical. This division is a typical feature of other members of the Burkholderia genus, where the primary chromosome specifies the majority of the core genome, and more specialist ‘lifestyle’ determining genes are present on the secondary replicons 2.

Much of my work has focused on the megaplasmid pC3. This was previously known as chromosome 3, but we have found this replicon to be non-essential in every Bcc strain we have investigated 3,4.  We have shown that pC3 has roles in virulence and antifungal activity in various Bcc species, to varying degrees dependent on the strain 3,4.  We have also demonstrated that it is important for stress tolerance in B. cenocepacia H111 4. Our most recent publication investigated the phenotypes of genetic ‘hybrid’ Bcc strains, each of which bore a different strain’s, or even species’, pC3.  We also attempted to localise the area of pC3 responsible for virulence, by the construction of derivatives bearing large deletions on pC3 5.

The Burkholderia genus has recently been divided into further genera, one of which is the ‘Paraburkholderia’.  This clade contains plant-beneficial environmental strains, which have rarely been isolated clinically 6,7.   Like the members of the Burkholderia genus, Paraburkholderia species produce a wealth of secondary metabolites, which confer properties such as antifungal activity and the ability to degrade recalcitrant environmental pollutants8.  A current research interest of mine is the utilisation of this unexploited potential.

Most bacteria release spherical membrane vesicles (MVs), which are composed of the cellular membrane and are ~20 to 400 nm in diameter.  MVs have fundamental roles in various biological processes, including gene transfer, protein exchange, quorum sensing, nutrient acquisition, phage decoy and are involved in the pathogenicity of the bacteria. Because of their various functions, MVs are also used in several applications, such as vaccine development, drug delivery and can be used as scaffolds for enzyme reactions. Even though the biological functions of MVs are becoming significant, how MVs are produced and the factors that influence MV production is not fully understood.

In our group we are studying the functions and formation of MVs. In our early study, we found out that MVs account for the majority of the extracellular matrix proteins in biofilms. This study showed that the protein composition of MVs derived from planktonic and biofilm cells differ, indicating that the content of the MVs reflects the physiology of the cell. Recently, we have identified new pathways and mechanisms for MV formation that is triggered by phage related genes in the subpopulation of the cells. This pathway is especially relevant under stress conditions including biofilms. We next aim to understand how the MV formation pathway or mechanism influence the content and function of MVs. This knowledge would help us better understand how bacteria respond to the environment and interact with each other. 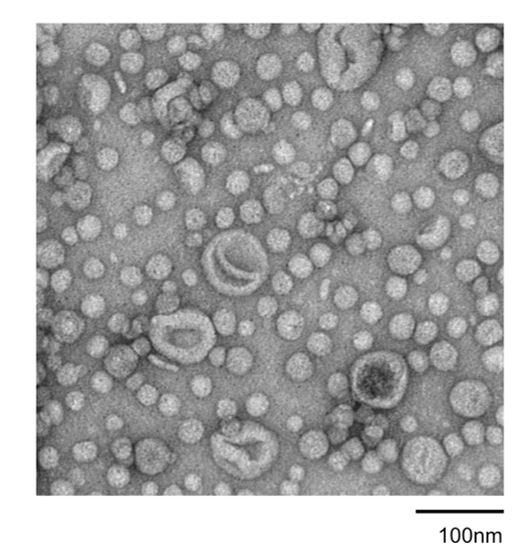 Investigating the Methylome of the Burkholderia cepacia complex (Bcc) members

DNA methylation is known to be the major epigenetic modification mechanism in bacteria, protecting the genome and maintaining its integrity. It is carried out by RM systems that consist of methylases (M) and restriction endonucleases (R) responsible for methylation of ‘self’ DNA, and restriction of ‘foreign’ DNA (bearing different methylation patterns). Bacteria can also possess so called ‘orphan’ methylases that can influence important cellular processes like DNA replication, DNA repair and regulation of gene expression (Fig 1). We would like to investigate methylation patterns in Bcc members, so as to fully understand the role of methylation in speciation and prevention of genomic material transfer in the Bcc, as well as to learn more about the influence of RM systems on bacterial phenotypes. 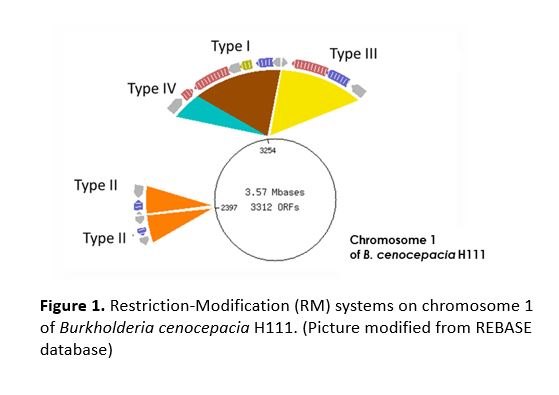 We are examining the essential genome of Burkholderia cenocepacia and Pseudomonas aeruginosa both of which are opportunistic pathogens and inherently resistant to a number of antimicrobials.

To achieve this we are using a technique called transposon sequencing (Tn-Seq). In this technique we create a large pool of random transposon mutants, which should on average cover the entire genome with insertion mutations. We grow the mutants, extract the DNA and using next gen sequencing establish where each transposon has inserted. Genes which have no insertions are assumed to be essential because these genes are unable tolerate transposon mutations.

The figure below shows a section of our results for B. cenocepacia H111. The black lines depict transposon locations on the genome and in this example we can see 2 genes which are devoid of transposons and are considered essential.

A section of our Tn-Seq results from chromosome 2 of B. cenocepacia. The black lines depict where transposon insertions we found and how many reads map to that particular insertion. BCAM0994 and BCAM0995 had very few transposon insertions in this experiment compared to the upstream and downstream genes. Hence, BCAM0994 and BCAM0995 can be considered essential because they were unable to tolerate transposons within these genes.

We are extending our work on essential genes to establish which genes are required to support growth under stressful conditions. Our latest results have identified a number of genes which are required to tolerate specific types of stress. These included: a tat translocase which moves specific proteins into the periplasmic space, two component systems which are active in response to specific stresses and transporters required to remove toxic substances from the cytoplasm.

We are currently extending the project to include environmental pollutants and genes which contribute towards antibiotic tolerance.