The Limnological Station lies near the city of Zurich at the left shore of Lake Zurich within the Navillepark public garden in the community of Kilchberg.

The scientific research on Lake Zurich started at the end of the 19th century. The first two limnologists with a good international reputation were Leo Minder and Fritz Nipkow. Around 1920 Leo Minder intiated a water quality monitoring program of the City of Zurich Water Supply. Unfortunately, the very significant data of the first 15 years of Lake Zurich monitoring are not available any more. In the middle of the 1930ies the Cantonal Laboratory began to investigate Lake Zurich. The activities were first supervised by Ernst Waser and later by Eugen Thomas . In 1975 the program was stopped. Since then the monitoring program is entirely covered by the City of Zurich Water Supply.

was known worldwide for his research about the role of phosphorus as the main factor of lake eutrophication. His enormous efforts and those of Hans Burla (professor of Zoological Systematics at the University of Zurich) led to the foundation of the Limnological Station and the Zoological Field Station in the year 1977. Before 1975 the buildings within the Navillepark public garden belonging to the community of Kilchberg were in a very bad state and a complete reconstruction was urgently needed. However, the community had no plans for the future use. Therefore, the politicians offered cooperation between the community and the university. The buildings were renewed by the community and subsequently rented by the university. Since there was still some resistance in the university administration and in the education department of the government a campaign was started to convince the people that a scientific base at the shore of Lake Zurich is of high relevance for the Institute of Plant Biology, the University, and the inhabitants around the lake. Eventually, the arguments convinced the responsible politicians of the government of the Canton Zurich. The contract with the community was accepted and the money to equip the laboratories in the renewed buildings was made available. 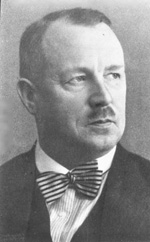 As mentioned above, the pioneers in the scientific limnology of Lake Zurich were Leo Minder (1887-1961; head of the chemical laboratory of the city of Zurich Water Supply from 1914-1952) and Fritz Nipkow (1886-1963; pharmacist and limnologist without position-private scientist). Leo Minder was the first to describe the phenomenon of biological limestone precipitation, and Fritz Nipkow presented the first sediment profiles from the lake.
In the thirties Ernst Waser started the cantonal monitoring program. He was professor at the University of Zurich. Prof.Waser engaged the biologist Eugen Thomas for the examination of rivers and lakes.
Eugen Thomas was one of the word leading experts on the problems of eutrophication . He observed that the increased waste water input after the Second World War led to intense growth of filamentous green algae in Lake Zurich and dense phytoplankton populations (e.g. the "burgundy blood algae" Planktothrix rubescens). At particular weather situation the biomass accumulated at the shore. The anaerobic situation and the high concentrations of organic material allowed a rapid growth of the red bacterium Lamprocystis roseo-persicina.

Many experts of the Canton of Zurich administration stressed that waste water purification would be the only way to improve the situation of Lake Zurich. Based on nutrient additition experiments Eugen Thomas recommended additional phosphorus removal since phosphorus is the most limiting nutrient in almost all lakes of Switzerland. The sewage treatment plant within the drainage area of lakes were first equipped with simultaneous phosphorous precipitation to reduce the incoming phosphorus to 90 to 95% in the outlet and in a second step with additional filtration (total phosphorus reduction 99%). These measures had the consequence that the phosphorus content of Lake Zurich water was reduced at spring overturn from 80 mg m-3 in 1965 to about 10 mg in 2005. Before the establishment of the Limnological Station at Kilchberg the samplings were carried out from a boat of the Lake Zurich water police.

Education in limnology before 1977 (foundation of the Limnological Station)

Before the habilitation of Eugen Thomas, there was no university education in limnology at the University of Zurich, but only at the Technical University (ETHZ) and later on at the Swiss Federal Institute of Aquatic Science and Technology (EAWAG) in Dübendorf. Eugen Thomas introduced the limnology at the Institute of General Botany which was at that time a part of the Philosophical Faculty II of the university. A lecture of one hour was offered in both semesters as well as a course of four hours every second week. Both diploma and Ph.D.- theses could be done in the field of limnology. However, all students had to work at the Cantonal Laboratory at very restricted space.

The view from outside of the Limnological Station as well as of the Fieldstation (Aussenstation) of the Zoological Museum Zurich did not change from the seventies until now. However, the first boathouse for the small boat of the department was in a bad shape and a new one was urgently needed. In the early 1980ies the community of Kilchberg constructed a new boathouse together with a small harbor for motor- and sailing-boats. Before the appointment of Fritz Jüttner as new Head of Department the university managed to rent a part of the building at Seestr. 234. An analytical laboratory was established at this site which is still in use today.

Heinz Maag of the Zoological Fieldstation was here in Kilchberg since the first days in 1976, as was Ferdinand Schanz . Many of the sampling apparatus also used by the Limnological Station have been constructed by H.Maag. In 1983 Eugen A.Thomas retired and Reinhard Bachofen replaced him as transient director for the period until the limnology professorship would be renewed. R.Bachofen resided at the Institute of Plant Biology where he was the head of the microbiology departement. In 1990 Fritz Jüttner was appointed full professor at the Department of Limnology of the Institute of Plant Biology and director of the Limnological Station at Kilchberg. He is a well known expert in chemical limnology (organic trace compunds) and the toxicology of substances synthetized by aquatic organisms (algae and mainly cyanobacteria). He retired in 2005 and was immediately followed by Jakob Pernthaler . Research of J. Pernthaler is mainly focused on the characterization of bacterial communites in aquatic ecosystems, on studies of microbial food webs, and the population dynamics and physiological properties of aquatic bacteria.